DHCP packets are not forwarded by the S5700 switch at L2

DHCP packets are not forwarded by the S5700 switch at L2

Huawei switch series is one of Huawei’s most important network equipment product series, of which S5700 series is also an important part of the switch series. During the operating, we noticed DHCP packets are not forwarded by the S5700 switch at L2? What’s the issue? How to configuration of DHCP server? How to solve the issue? This article will tell us how to do it.

Issue Description
As shown in the below figure, a DHCP server (Switch B) is deployed on an enterprise network to dynamically allocate IP addresses to terminals from VLAN 200 and 300. The intermediate switch, Switch A has two VLANIF in vlan 200,300 , where the vlanif 200 interface is configured as a DHCP client while the vlanif 300 is configured with a static IP. 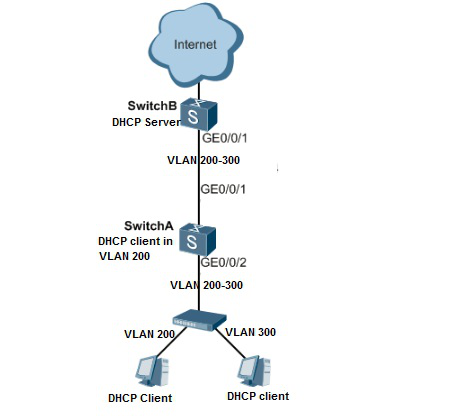 -Collected a packet on the switch by using the port mirroring command to verify if the DHCP request sent by the client is received and sent by it.

According to the packet we can observe that the switch receives the DHCP request from the client but does not forward them further even though between the client and the server we have L2 connectivity. Given the packet, we can conclude that the packets are dropped by the switch.

Solution
To solve the problem, we enabled the DHCP function on the switch by running the “dhcp enable “command in order to have the received DHCP packets processed and forwarded by the CPU of the switch.

After further investigation we noticed, that the problem in question appears in the vlans that do not have the  dhcp function enabled in the situation where the switch is configured as a DHCP client in an interface with the  “ip address dhcp alloc-ip” command without having the DHCP function globally enabled globally.

Have you ever encountered such a problem? Through this article, we can confirm the problem firstly, and then solve the problem according to the above steps. If you have any questions, please contact: [email protected]

Do you know how to smoothly evolve from the GPON to the 10G GPON?

Network Evolution Overview For the GPON network that has been deployed on the live network, 10G GPON can smoothly evolve... read more

How to use the WPS function of a Huawei ONT

How to configure OLT VLAN

Hello, everyone! In today's article, I will briefly explain VLANs for access networks, and after that, I will show the... read more

Hello everyone, Today, we will give you a detailed introduction to what kind of technology Mesh network is.   What is Mesh... read more