What is Multi-Protocol Label Switching(MPLS)?

What is Multi-Protocol Label Switching(MPLS)?

At first, MPLS is a protocol used to improve the forwarding speed of routers. However, MPLS has become an important standard for expanding the scale of IP networks because MPLS has outstanding performance in the current IP network in terms of Traffic Engineering and VPN.

Multiprotocol means that MPLS can carry multiple network layer protocols, and MPLS is usually between Layer 2 and Layer 3(IPv4, IPv6, IPX, SNA, etc.) of the network model. A label is a short, easy-to-handle information content that does not contain topology information and has only local significance.

How does MPLS work?

The MPLS adopts the dual-plane structure, which consists of the Control Plane and Forwarding Plane. The control plane is based on connectionless services and provides powerful and flexible routing functions to meet the network requirements of various new applications. The control plane is responsible for label distribution, label forwarding table establishment, and label switching path establishment and removal. The forwarding plane is also called Data Plane. It is connection-oriented and supports Layer 2 networks such as ATM and Ethernet. The forwarding plane adds and deletes labels for IP packets, and forwards received packets based on the label forwarding table.

What are application scenarios for MPLS?

In the packet transport field, the MPLS technology is mainly used to construct tunnels to carry various types of services transmitted by PWE3 (for example, TDM, ATM, and Ethernet), to implement end-to-end transmission of services on packet networks. Therefore, MPLS is not a service or an application. It is actually tunnel technology. This technology not only supports multiple upper-layer protocols and services but also ensures the security of information transmission to some extent.

The following figure shows the typical MPLS application in the packet domain. In the figure, the services between the NodeBs and RNCs are transmitted by PW1 and PW2 carried by the MPLS tunnel. 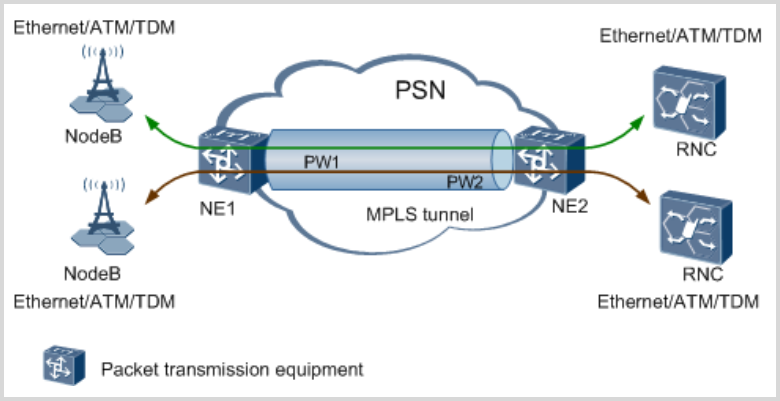 The above is what I share, I hope it will help you. thanks for reading.

Cross-connect capacity of the OptiX OSN 3500

This time, I will share with you a case about the Cross-connect capacity of the OptiX OSN 3500 Different cross-connect... read more

Hello friends, do you know what DCN is? Let's see it. Data center networks are the infrastructure of data center services,... read more

Optical fiber transmission is a kind of optical waveguide made of glass or other materials. The basic principle of... read more