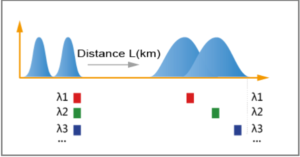 A form of dispersion where optical pulsesare spread because optical signals in different phase status are transmitted at different speeds due to the random birefringence of optical fibers. 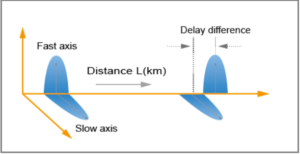 Impact of Dispersion on the System

The spreading of optical pulses in the time domain caused by CD and PMD will lead to distortion of signals and inter-code crosstalk, thereby causing bit errors.

As the transmission speed increases, the pulse width is reduced, the impact of dispersion on the system becomes more serious.

To avoid the impact of dispersion on communication, use optical modules with high dispersion tolerance and add dispersion compensation modules to the line.

The dispersion tolerance is defined as the maximum dispersion that the system can tolerate when the power penalty due to dispersion is 1 dB.

The dispersion coefficient is the difference between the arrival time of a 1-km optical fiber transmitted between two optical waves with a wavelength spacing of 1 nm. The unit is ps/nm·km.

The typical dispersion coefficient of a G.652 single-mode long-wavelength fiber (SMF) is 17 ps/nm.km. In actual use, redundancy must be added. When the dispersion tolerance is converted to the dispersion-limited distance, the dispersion value of the fiber is 20 ps/nm.km.

Generally, the dispersion tolerance of a 2.5G line system is 12800 ps/nm. The distance is 12800/20 = 640 km. When the transmission distance is greater than 600 km, dispersion compensation needs to be considered.

Optical fiber transmission is a kind of optical waveguide made of glass or other materials. The basic principle of... read more

Hello friends, do you know what DCN is? Let's see it. Data center networks are the infrastructure of data center services,... read more

Problem Description The link aggregation function is activated between two switches in a certain office. One port uses the dedicated... read more