Today, we will give you a detailed introduction to what kind of technology Mesh network is.

Since the birth of the 1960s, the development of network technology is extremely rapid. The star structure, ring structure, bus structure, distributed structure, and tree structure of traditional LAN have all played a role in various fields, providing stable network connection and a large amount of data traffic for billions of people around the world.

However, there is such a LAN technology, it was born very early, but because of the complex structure, has not been paid attention to. However, with the development of wireless network technology today, its advantages are re-emphasized. This type of network is mesh network. 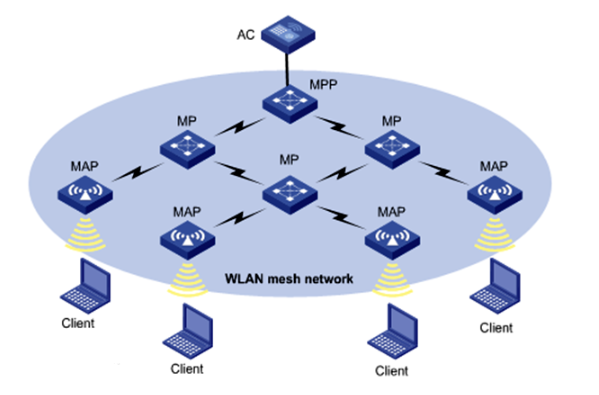 Features of the Mesh Network

In terms of the network topology, a wireless mesh network has the following features:

All the nodes in the LAN are connected together, and there are multiple connection channels between any two nodes, which show obvious decentralization. The consists of a group of wireless APs that are distributed in a network. The APs are interconnected through wireless relay links in point-to-point mode to expand the wireless “hot spots” in a traditional WLAN into wireless “hot spots” that cover a large area.

Expands the coverage of traditional WLAN hotspots to a larger coverage of hotspots, eliminating the bandwidth decrease caused by the increasing distance of the existing WLAN. In addition, the system using the Mesh structure can avoid the interference of obstacles, so that the signal transmission is unimpeded, and the blind area is eliminated.

High utilization is another technical advantage of Mesh networks. On a single-hop network, a fixed AP is shared by multiple devices. As the number of network devices increases, the availability of the communication network of the AP decreases greatly. On a Mesh network, each node is an AP. Therefore, this problem does not occur. Once the availability of an AP decreases, data is automatically reselected to another AP for transmission.

That is all I want to share with you!

Issue Description 1- When migrate PON service from one OLT to another, at first be sure to follow the Preparations Before Migration procedure according with your scenario, as next link: 2- Then, follow this other procedure to Configuring PON Service Transfer: About step 7 of this procedure, in Migration Task Management area, select the migration task to be verified, and click... read more

This post aims to help you understand what the default password of OLT is. Please see more details below.   BACKGROUND... read more

What Is an ONT An optical network terminal (ONT) is a device that provides a network for home users. It... read more