When we log in to the firmware of some routing ONTs or home routers through the webpage, we will see that there is an option called PPPoE at the location of the WAN connection, so what is PPPoE?

PPPoE integrates the advantages of PPP and implements functions such as identity authentication, encryption, and compression unsupported by traditional Ethernet.

PPPoE dial-up is the most common method of enabling terminals to connect to the ISP network for broadband access.

PPPoE can be used on Ethernet cables, such as cable modems and digital subscriber lines (DSLs), to provide access services for users through Ethernet protocols.

Simply put, PPPoE combines the cost-effectiveness of Ethernet with the manageability and controllability of PPP to provide Internet access. For carriers, it can fully utilize the current architecture of the telecommunication access network and the current dial-up network resources, without requiring major changes in the operations and management modes. For users, they obtain a similar experience to that obtained using the original dial-up Internet access.

How Is a PPPoE Connection Established?

This section describes the PPPoE packet structure and the stages of PPPoE connection establishment. 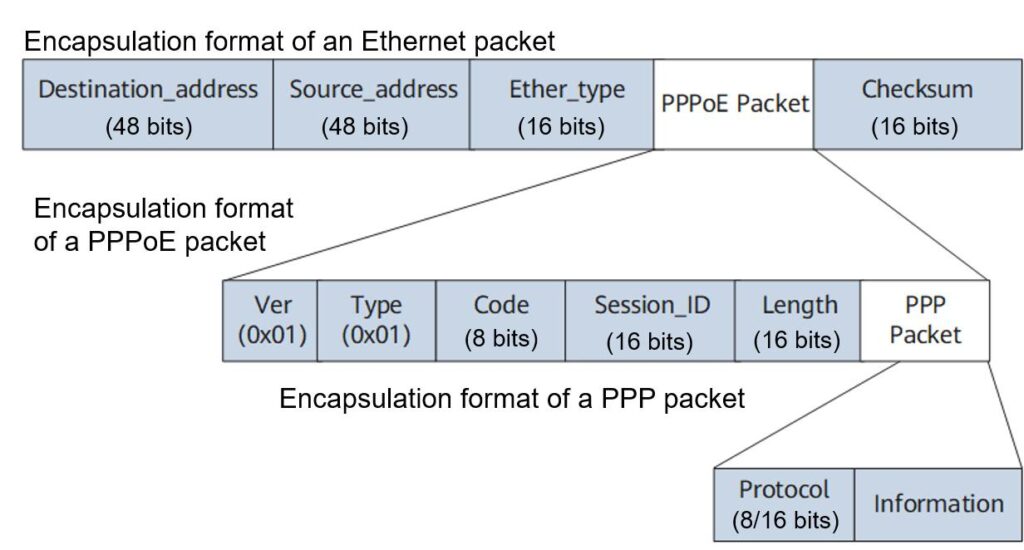 Description of fields in a PPPoE packet

Before learning about the stages of PPPoE connection establishment, you need to understand the roles involved in the PPPoE network architecture.

PPPoE adopts the client/server model. As shown in the following figure, the basic roles in PPPoE networking are the PPPoE client, PPPoE server, and RADIUS device. 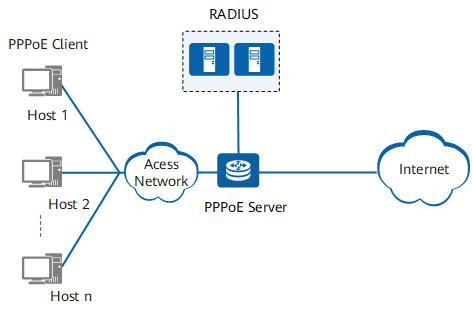 The process in which a PPPoE user goes online involves two stages: the discovery stage and the PPP session stage. In the discovery stage, a PPPoE server is selected and the ID of the session to be established is determined. The PPP session stage refers to the standard PPP process, including LCP negotiation, PAP/CHAP authentication, and NCP negotiation.

The following figure shows the time sequence of the PPPoE discovery and PPP session stages. 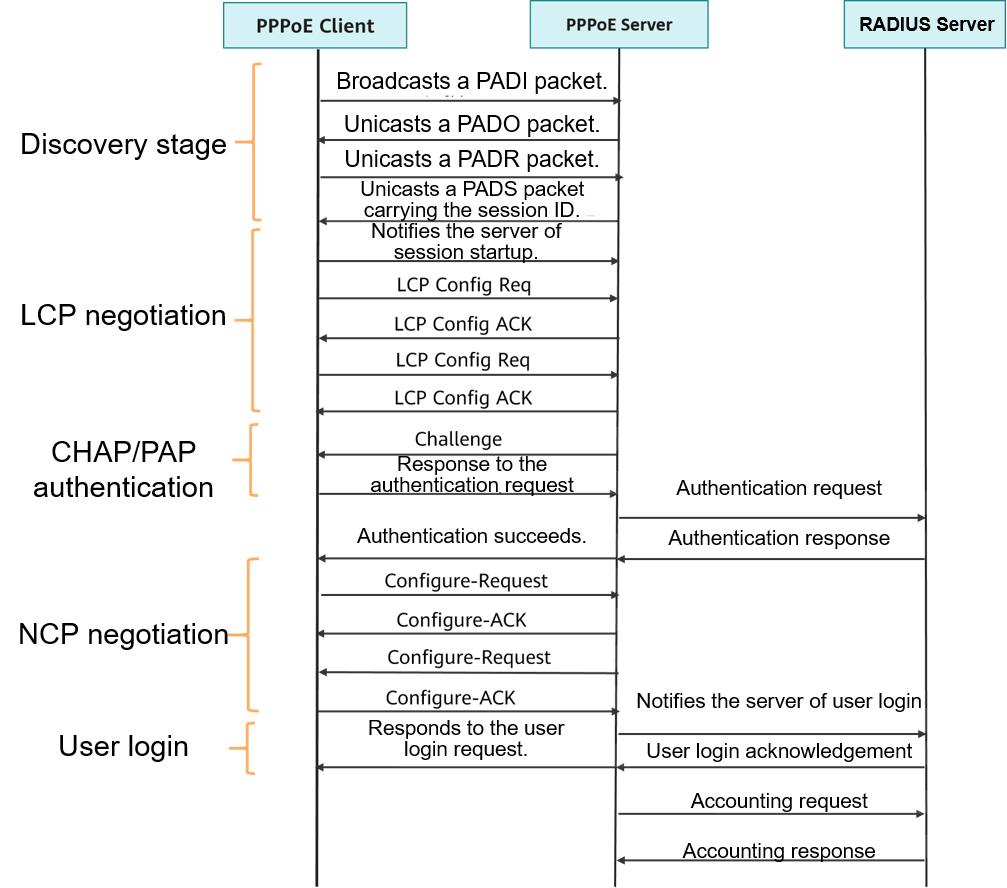 Time sequence of the PPPoE discovery and PPP session stages

In the discovery stage, the device allocates a session ID to the user. The session ID identifies a PPPoE virtual link between the user and the device.

The PPPoE client may receive PADO packets from multiple PPPoE servers. The PPPoE client selects a qualified PPPoE server among those that return PADO packets based on certain conditions. The client then sends a PPPoE Active Discovery Request (PADR) packet back to the selected server. The PADR packet carries information about the requested service.

The PPPoE client and PPPoE server send LCP Configure-Request packets to each other.

If both ends reply with a Configure-ACK packet within the specified LCP negotiation interval and before the timer for LCP negotiation expires, the LCP link is successfully established.

NCP negotiation mainly deals with network-layer parameters, such as IPCP and IPv6CP, in PPP packets. A PPPoE client mainly uses IPCP to obtain the IP address or IP address segment for network access.

Hi, everyone, today I will introduce the classification of Huawei ONTs. Hope to learn with you through this article. What... read more