Modem vs Router: What’s the Difference?

Modem vs Router: What’s the Difference?

What is a router and what does it do?

Routers are classified into local routers and remote routers. Local routers are used to connect network transmission media, such as optical fibers, coaxial cables, and twisted pairs. The remote router is used to connect the remote transmission medium and the corresponding equipment is required. For example, the telephone line should be equipped with a modem, and the wireless should be through a wireless receiver and transmitter. 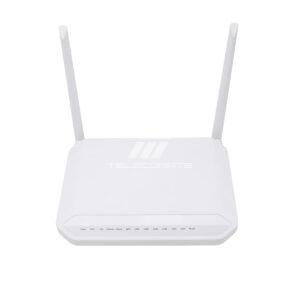 A router is basically used to share a network connection to multiple devices (of course this is a simple description). Most routers today are WiFi routers, which create a WiFi network to which multiple devices can connect.

Often routers also have multiple ethernet ports, which can be used to connect multiple devices with network cables.

Servers on the Internet communicate with routers, which direct network signals to corresponding devices on the LAN/private network.

What is a modem and what does it do?

A modem is a device that receives an analog signal from your internet service provider (ISP) and translates it into a digital signal that your devices can understand and vice versa. This allows your devices to send and receive data over the internet.

If it is a cable modem, it is connected to the ISP’s infrastructure via coaxial cable.

Modem vs router: what’s the difference?

A modem is a necessary device for computer networking. With a modem computer, dial-up Internet access can be performed, and a router is a device that helps multiple computers share a network. With the help of a router, several computers can be connected to the same network cable, but the router is not a necessary device for the computer to access the Internet. Without the router, the computer can still connect to the Internet through the modem.

The appearance of the modem is relatively simple, like a flat cuboid box, which is very small, while the shape of the router is various, including cuboid shape and oval shape, which is larger than the modem the wireless router also has a different number of antenna arrangements.

When the computer sends data, the modem first converts the digital signal into a corresponding analog signal, a process called “modulation”. Before the modulated signal is transmitted to another computer through the telephone carrier, the receiver’s modem is also responsible for restoring the analog signal to a digital signal that the computer can recognize. This process is called “demodulation”.

It is through such a digital-to-analog conversion process of “modulation” and “demodulation” that the long-distance communication between the two computers is realized.

The router has the function of judging network addresses and selecting IP paths. It can establish flexible connections in a multi-network interconnection environment and can connect various subnets with completely different data packets and media access methods. The router only accepts source stations or other routers. It belongs to an interconnected device at the network layer.

So now you can distinguish the following?

This is what I want to talk about/share with you today, thank you!

How to Add an ONT to an OLT

Hello, everyone! Applicable Versions This case applies to the MA5600T V800R007C00 and later versions. Question How to add an ONT to the PON... read more

Issue Description 1- When migrate PON service from one OLT to another, at first be sure to follow the Preparations Before Migration procedure according with your scenario, as next link: 2- Then, follow this other procedure to Configuring PON Service Transfer: About step 7 of this procedure, in Migration Task Management area, select the migration task to be verified, and click... read more